What “Brittany Runs a Marathon” Gets Absolutely Right This weekend for date night, I dragged convinced Michael to see “Brittany Runs a Marathon,” and I’m so glad I did!

I knew that the subject matter of the movie would be potentially sensitive for many – it touches on the loaded topic of weight loss, after all. As a runner and someone who has not only lost a good bit of weight myself, but also as someone who coaches others through the process, I wanted to go in with as fresh a perspective as possible. So, other than watching the trailer and reading one Runner’s World review, I minimized my exposure to online commentary prior to seeing the film myself.

Is it a perfect movie? Of course not. But it gets a lot of things right, both about long distance running and weight loss.

I applaud “Brittany Runs a Marathon” for tackling a potentially touchy subject and maintaining an honest and sensitive lens. There were many moments that I related to, but in today’s blog post, I want to zero in on the athletic injury depicted in the film.

Today, we’re talking about stress fractures, and how you can learn from Brittany’s mistake and avoid getting sidelined by a major injury!

Even though Brittany’s stress fracture is a distressing moment in the movie, I was pleased that the filmmakers had the courage to realistically depict a new runner train for an event, get injured, miss the event, and re-train for it again.

It is unfortunately very common for people – especially women – not to run an event they’ve trained for (especially half and full marathons) because of an injury like a stress fracture.

Women are prone to running injuries for two reasons:

To be clear, the female athlete triad does not equal an eating disorder. Of course, it could co-occur, but that’s not always the case. It simply means that the food you’re eating is not keeping up with the demands you’re placing on your body for energy.

Of course, it can happen because someone is intentionally over-exercising to get leaner. Women who compete in physique shows often lose their periods prior to the show, for example, which places them at higher risk for injuries like stress fractures (because of the loss of bone density).

But even without disordered eating, this can happen when a healthful eater trains vigorously for an event and doesn’t increase food intake to reasonably compensate. It can happen completely by accident, because you don’t always feel “hungrier” when you need more food than normal. The tell-tale signs that under-eating is catching up with you are pesky injuries and changes in your menstrual cycle.

Furthermore, symptoms of the female athlete triad are relatively common. It’s been estimated that 69% of female athletes in “lean sports” like running, ballet, and gymnastics lose their period, whereas only 2%-5% of the general population do.

Because it’s better to catch the female athlete triad early before it blooms into a full-blown fracture and/or loss of menstrual function, here are some tips for preventing it before it ever happens:

Don’t Use an Endurance Event to Lose Weight

Unlike Brittany’s m.o. in the movie, if you are actively trying to lose weight, I would not advise using an endurance event (beyond a 5K or 10K) as part of your weight loss strategy. Newer runners underestimate the stress that longer races will place on their bodies. You do not have to be underweight to have a stress fracture – all it takes is insufficient energy availability in your diet.

Instead, focus on one thing at a time. If you want to run a race, train for a race. But if you want to lose weight, focus on that. Improve your diet, reduce overall calories (however that works for you), and follow the American Heart Association guidelines for exercise – 150 minutes a week, which is 30 minutes every weekday. Proper strength training and building a nice cardio base will help you lose weight and prepare you to train for bigger events, but won’t stress out your body like a true endurance event. Believe it or not, you’ll actually lose weight faster if you don’t put so many demands on your body at once.

If you are training for an endurance event, be sure to fuel your body appropriately. If you are training for a half marathon or marathon and are clocking in serious miles every week, you will need to eat more, too – especially carbohydrates. A big event requires you to think like an athlete, not like Weight Watchers. Read about endurance athletes like Shalene Flanagan or Molly Huddle to see how important fuel is for the active woman.

Carbohydrates like oatmeal, bananas, rice, and other grains should not be off-limits for the very active woman. Even the much-maligned sugar can play an important role for the endurance exerciser!

“Clean eating” and the rise of the ketogenic diet has had a huge impact on food culture, and the potential for seeing food through a distorted lens is still there even though “calorie counting” has been thrown aside by many. Active women benefit from relinquishing pervasive food fears and embracing the power and fuel that carbohydrates – and sufficient calories – provide.

Finally, if you are training for an endurance event, follow a proper training plan that provides recovery and cross-training.

As you may have noticed in the movie, Brittany’s stress fracture was partly precipitated by over-exercising. She was trying to get the scale to move faster than it wanted, and her reactionary exercising pushed her injury over the edge.

P.S. While I support the use of weighing – even daily weighing – as a habit of weight management, if you are weighing yourself before and after exercise, you may need to take at least a temporary break from weighing yourself. Depending on your history with the scale and your current headspace around it, it may or may not be a good tool for you.

Real training plans treat you like an athlete – like your body is a fine piece of machinery that needs time and attention and maintenance. Therefore, a good training plan allows for recovery.

Ideally, I like to see runners not running consecutive days, and to have 1-2 complete rest days per week from exercise. Also, when I write training programs for runners, I make sure that the runs have varying intensity – some days are long runs, some days are intense tempo runs, and other days are sprints.

I also prioritize strength training for runners – sufficient core and hip work to strengthen the mechanics of running, prevent the likelihood of injury, and help you run faster and further.

Here are some equipment-free examples of exercises that can help you be a better runner:

In other words, don’t fall into the trap that Brittany did at the beginning of the movie: “Well, running’s free, so I’m just going to run for all of my exercise.” Running more makes you more athletic only up to a point – and then you have to switch things up to make sure you continue progressing without injury. And you can exercise at home, without too much equipment or expense.

Running and the Development of Grit

If you saw the movie, you know that – despite the stress fracture – Brittany does indeed go on to run a marathon! The following year, she successfully trains for and finishes the event – this time with her life seemingly together.

She has a new job, new boyfriend, and new apartment – apparently running made her life all better!

In fact, this was one of the biggest criticisms that I had heard about the movie prior to seeing it – that it was some kind of running and weight loss “glow up” trope, where she loses the weight and suddenly everything works out like magic.

But I think that criticism like this is one-dimensional, because it doesn’t take seriously what disciplined and focus athleticism does for someone.

Doing something like running a marathon helps you develop significant grit – especially if you deal with an injury and have to learn from it.

Getting serious about exercise doesn’t fix everything, but it changes your life. Focusing on your fitness is often a portal for self-growth, whether or not you lose weight.

As a personal trainer, I daily witness how the positive changes developed through fitness spill over into other areas of life. I’ve seen clients:

It’s not that exercise directly fixes anything other than your health – it’s that the grit you learn begins transferring to other areas of life. You begin to spot places where you can grow, you learn to manage your time, and you develop a respect for yourself and for your own self-care.

In other words, high performance in one area encourages improvement in other areas, too. It helps you see life differently.

It’s what I loved about the movie. In terms of her training, she messed up, she had to recover, she learned from it, and she tried again. This life skill is not confined to exercise – being bold in your efforts, making mistakes, recalibrating, and being persistent are traits that help you win in life, not just in sports.

As far as I’m concerned, it’s totally realistic that within the “One Year Later” window Brittany could have not only revamped her training, but also made other changes off-screen that contributed to her well-being.

So I say nay to the negative reviews about “Brittany Runs a Marathon.” It’s not always pretty, and there is that absolutely excruciating scene at the birthday party (if you’ve seen it, you know!), but it gets a lot right.

And if it gets you running, all the better!

This site uses Akismet to reduce spam. Learn how your comment data is processed. 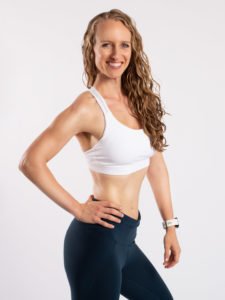 Sometimes, exercise alone isn’t enough to see meaningful results. Use the power of nutrition to supercharge your progress. Download my e-cookbook now, to access 30 recipes that will get you moving in the right direction!